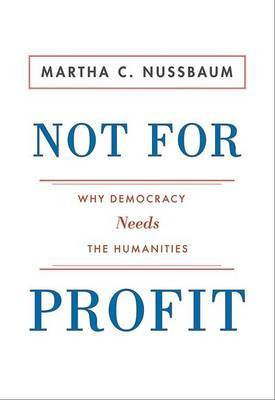 Not for Profit : Why Democracy Needs the Humanities

Argues, thinking about the aims of education has gone disturbingly awry in the United States and abroad. This title offers a manifesto that should be a rallying cry for those who cares about the deepest purposes of education.

2012. Reprint. A near fine copy only marked by light shelf rubbing to the wraps.

Nussbaum makes a persuasive case that, in the age of No Child Left Behind, 'the pedagogy of rote learning rules the roost.' -- Yorker Nussbaum ... brings to this perennial [education] debate an impassioned urgency ... and broad erudition... Nussbaum's defense of this worthy cause is deeply learned. -- Mick Sussman, New York Times Book Review One turns with some relief to Martha Nussbaum's Not for Profit, and her impassioned ... argument in favor of study of the humanities. -- er Brooks, New York Review of Books Against the commercialisation of the academy, [Nussbaum] poses a sentient, Socratic and cosmopolitan vision of higher education. -- Jon Nixon, Times Higher Education A comprehensive look at today's worldwide marketplace for college students. -- Michael Alison Chandler, Washington Post It's an important and timely plea because the pursuit of so-called useful educational results continues apace, and because the threats to humanistic education are indeed profound. -- Michael S. Roth, Chronicle of Higher Education Moving deftly between analysis and and polemic, the author draws on education practices in India, experimental psychology, the works of such liberal education proponents as Dewey and Tagore to emphasize the importance of critical pedagogy for the development of individual responsibility, innovation, and self-examination... [I]n advocating educational curriculums that recognize the worth of personal development and creative thought, this slim book is itself a small but decisive step in the effort to broaden and enrich current pedagogical practices. -- Publishers Weekly For Nussbaum, human development means the development of the capacity to transcend the local prejudices of one's immediate (even national) context and become a responsible citizen of the world. -- Stanley Fish, New York Times Opinionator Blog This is a passionate call to action at a time when the nation is becoming more culturally diverse and universities are cutting back on humanities programs. -- Vanessa Bush, Booklist Nussbaum's ideals are dynamic. Hers is a cosmopolitan humanism oriented towards global citizenship... Not only a spirited defence of the humanities and a lament for their perceived decline, it is a call to action. -- Luke Slattery, Australian [A] short, though-provoking book... Not For Profit offers a passionate and persuasive defence of the humanities. While most of the cases Nussbaum discusses are drawn from the US and India, her argument has undoubted relevance for Australia. -- Tim Soutphommasane, Australian Nussbaum believes that cutting the liberal arts from our academic programs will lead to undereducated graduates. To make responsible decisions, a student must comprehend more than a limited business-oriented curriculum can provide... Not For Profit is required reading for educational administrators, government analysts, and liberal arts instructors at all levels. -- Julia Ann Charpentier, ForeWord But when economic growth becomes the focus of education, both democracy and human decency are in jeopardy. In her new book, Not For Profit: Why Democracy Needs the Humanities (Princeton), acclaimed University of Chicago philosopher and legal scholar Martha Nussbaum argues that our culture of market-driven schooling is headed for a fall. -- John Allemang, Globe and Mail This book will certainly add weight to Nussbaum's considerable reputation and influence as a major public intellectual. Her core diagnosis is both accurate and compelling... Not for Profit is an important book with an urgent message that should be read and considered by the widest possible audience. -- Paul Russell, Globe and Mail Nussbaum's defense of the value of the humanities is informed, intelligent and deeply plausible--so much so that many readers might find themselves somewhat at a loss as to how our society, and indeed the world in general, has reached the point where such a book is even needed. What could be more obvious, and thus less in need of a defense, than the claim that a strong grounding in the arts and humanities is a great good, both for the individual and for the society in which she lives? ... I admire this book, as I do all Nussbaum's work, and I could not be more sympathetic to its message. -- Troy Jollimore, Truthdig This brief volume incisively argues that higher education around the globe must reprioritize toward preparing students to become 'citizens of the world'--a task that will require schools to cultivate imagination, empathy, and other trademarks of humanistic education. Nussbaum's analysis is a moving reminder of the humanities' practical consequence. -- Diversity Web [R]efreshingly free of the policy speak and narrow thinking that often dominate works on the subject... Nussbaum's unorthodox method of defining and then demonstrating the value of the humanities is perhaps the most compelling aspect of her book. -- Andrew Benedict-Nelson, Common Review As a model of public philosophy, [Not For Profit] is exemplary... There are no pronouncements from on high here, only strong arguments, forcefully made. -- Julian Baggini, Philosophers' Magazine Nussbaum makes a compelling case for the humanities' continuing value and importance. -- David A. Bell, Dissent This is a little book with a big, and important, message... Nussbaum has long demonstrated her courage as a public intellectual, and this book articulates the liberal vision that sustains her. -- John A. Scott, Philosophy in Review [E]xcellently written. -- Herman De Dijn, Ethical Perspectives As a model of public philosophy, [Not For Profit] is exemplary. Anyone familiar with Nussbaum's work will know that a lot is going on beneath the surface, and that her case has more and deeper roots than are on show here. However, she is always careful to argue for her conclusions as fully as is compatible with brevity and accessibility. There are no pronouncements from on high here, only strong arguments, forcefully made. -- Julian Baggini, The Philosophers' Magazine [Nussbaum's] book is a compact, animated, and mellifluous defense of the humanities that makes a powerful case for the ethical imperative of providing the younger generations of the world's democracies with a critical, engaged, liberal-arts based education. -- Erin McGlothlin, Belles Lettres

Martha C. Nussbaum is the Ernst Freund Distinguished Service Professor of Law and Ethics in the Philosophy Department, Law School, and Divinity School at the University of Chicago. She is the author of many books, including "Hiding from Humanity: Disgust, Shame, and the Law" (Princeton).