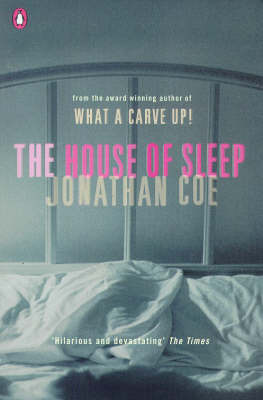 The House of Sleep

A comedy about the powers we acquire and relinquish when we fall asleep, and when we fall in love. It features Sarah who is narcoleptic, Terry, a disillusioned film critic for whom sleep is a memory, and for Dr Dunstan, sleep is nothing less than a global disease.

Jonathan Coe was born in Birmingham in 1961. He has published seven novels, all of which are available in Penguin: The Accidental Woman, A Touch of Love, The Dwarves of Death, What a Carve Up!, which won the 1995 John Llewellyn Rhys Prize, The House of Sleep, which won the 1998 Prix Medicis Etranger, The Rotter's Club, winner of the Everyman Wodehouse Prize and The Closed Circle. He has also published a biography of the novelist B.S. Johnson, which won the Orwell prize in 2005. He lives in London with his wife and two children.